×
MUSEUM
OUR STORY
The Jewish Museum of Lecce was opened on May 2016.
The project started from a private initiative with the aim of bringing to light a little-known piece of  history of this Salentine city that - unlike most Italian cities - seems to have erased every traces of the Medieval period. In spite of the almost total absence of material testimonies, the archive documentation about those ten centuries describes Lecce as an extremely lively city, populated by multicultural and multi-faith communities that made this city an important centre of economic and intellectual activities. 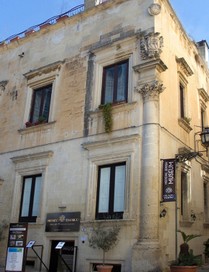 The Jewish community stands out among the most vital groups in Medieval Salento: a copious and strongly rooted presence since the beginnings of the Jewish Diaspora in Western Europe up to the Roman times. Throughout the Middle Ages the Jews played a significant role - particularly from the 14th century - when they settled in Lecce in the district where the Museum is currently located. 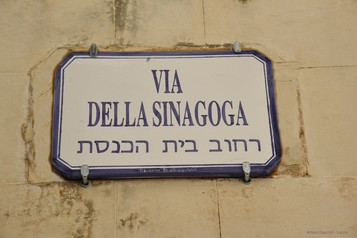 Back in 2009 Michelangelo Mazzotta, the owner of a tourist agency in front of the Basilica di Santa Croce, bought a house in the nearby Via della Sinagoga. The name of the street intrigued him so that he started doing some research about the history of the area. He surprisingly found out that his new house is located in the old Giudecca (Medieval Jewish district), so he decided to extend his studies.
Together with his daughter Francesca, Patrizia Isola, Francesco and Viviana De Giorgi, he founded a company that rented part of the Personè-Taurino Palace on January 2016, with the aim of converting its evocative underground area into a museum and showing a new side of Medieval Lecce to the upcoming tourists in Salento. Michelangelo soon realized that he could not endorse his project without a proper scientific support. Therefore, he contacted Fabrizio Lelli (Professor of Hebrew Language and Litterature, University of Salento) and ask him to create a permanent exhibition for the new museum. Thanks to his twenty-year research about Judaism in Salento from the past to present days, Professor Lelli created an itinerary that spreads academic studies to a wider audience and highlights the deep relationships between the Jewish and the Christian communities in the area.
Hence, the Jewish Museum of Lecce is directed by Professor Fabrizio Lelli and born from the strong partnership between various scholar: Paul Arthur (President of the Society of Italian Medieval Archeologists - SAMI and Professor of Medieval Archaeology, University of Salento), Fabrizio Ghio (freelance architect and archaeologist) and David Katan (Professor of English Language and Translation, University of Salento) who translated the informative material of the museum.
The project is constantly growing and, thanks to the help of those who believed in it, the Museum has become a cultural centre that holds events and exhibitions addressed to the locals and the international public, offering themes for reflection about Jewish identity and intercultural dialogue from the past to the present. School teachers and students are welcomed to attend seminars, in-depth workshops, temporary exhibitions and theatre performances. 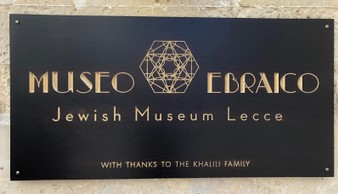 In 2019 the Khalili family started supporting the Museum, certain that its project has a significant role not only to shed light on the less known aspects about the social and cultural identity in Medieval Salento, but also to shares the values of multiculturalism to the new generations.
HOME | MUSEUM | VISIT | NEWS | JUDAICA STORE | SUPPORT US | CONTACTS | General Site Map
Via Umberto I n° 9 - 73100 Lecce (LE)
+39 0832 247016
info@palazzotaurino.com
(University of Salento)
Director: Prof. Fabrizio Lelli